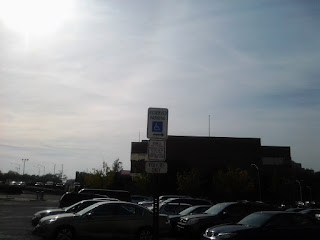 TRENTON-- Mercer County Freeholder candidate Dion Clark says progress has been made at City Hall, but more needs to be done.

Thursday morning, Clark, the longtime East Trenton resident, took a walk with Anwar's Reflections-- a Trentonian affiliate-- around City Hall, to highlight changes made to parking arrangements to benefit the handicapped.

However, in the process of recognizing that sign of progress, a city van was spotted illegally parked in the rear parking lot.

Clark brought the issue of handicapped parking to the attention of city council during their weekly meetings along with stating his concern on this blog just over a month ago.

Changes have since been made in response to Clark's previous complaints. Just a month and a half ago handicapped parking spaces were located 70 feet away from the historic building located on East State Street, now they are located only 23 feet away.

From a civic engagement standpoint, Clark's story is a testament to how speaking out and speaking up can affect change in your community.

Yet while recording the positive change at City Hall, a city van was seen parked illegally for 30 minutes in a fire zone that does not permit parking at any time.

Clark, who has consistently spoken out on quality of life issues in Trenton, went on to suggest that City Hall should have someone enforcing the parking rules and regulations here at City Hall, someone like a security guard, because it presents a safety issue, an accident may occur when parking rules are violated.

He went on to say that "there are many people here paying their bill, but that doesn't give you the right to park anywhere and break the rules".

Clark says he intends on reporting the city van parking violation to ensure that someone is held accountable for not adhering to parking rules and regulations.