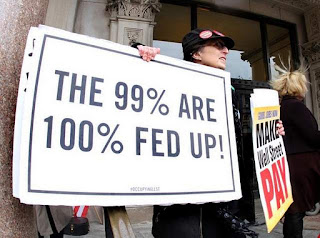 Trenton's protest rally was just one among 400 other protest rallies taking place across the country.

Protest organizers say that Wall Street executives represent the 1% of the population that is still thriving, making billions of dollars, while the remaining 99% of the population still suffers and loses their homes day after day. 99ers are concerned that a jobs bill has not been passed by the Congress to help jump-start the economy.

Despite light rain and chilly weather, protesters were not deterred Thursday afternoon as passer's by honked their horns in support of the rally. Protest organizers seek to put pressure on Congress to tax Wall Street to stimulate the economy and create millions of jobs.

Protest organizers say they are fed up and want to see a change immediately.

Mary, a supporter of Occupy Trenton and opponent of Wall Street greed said that there has to be a reasonable way to create jobs. She went on to say that it is a false argument to suggest that taxing the wealthy is a 'job killer' which has become an ongoing talking point from members of the Republican Party.

A group of singers voiced their dissent by saying that 'those prophets of profit are liars'. They went on to ask, 'will you do what's right, stand up and fight'.

Some opponents of Occupy Wall Street criticize the movement suggesting that it has no clear and coherent message. Some critics also point out that the Occupiers wrongly demonize or scapegoat Wall Street executives, who like others in a competitive marketplace, only seek to maximize profits, not get over or exploit working class people.