Should Trenton Occupy the Hood, That Is The Question 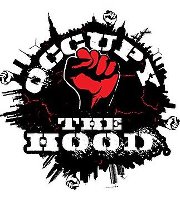 TRENTON-- For those that don't already know, there is a growing movement emerging all over the world. Members of this movement have been protesting a host of issues. From debit card fees and the growing gap between the rich and poor to Wall Street bailouts and corporate influence in politics, members of this movement are mad as hell and are not taking it anymore. That movement goes under the name, Occupy Wall Street.

Currently, there is an Occupy Trenton encampment located on North Warren Street in the state's capitol.

However, the impression many people have is that the movement is made up primarily of white, middle class individuals.

As a matter of fact, while standing at the North Warren Street encampment, I was greeted by an anonymous city man that said he was surprised to see me since I was a black male. Like others in the mainstream, he thought the movement was made up of 'young white kids' to use his words.

The city man and I began to dialogue about what the movement is about and he told me that what they need to be focusing on is the hell we [meaning African Americans] have been catching for years down here in Trenton.

He went on to tell me that for individuals that live in urban communities like Trenton, the Occupy Wall Street Movement and its protest of Wall Street executives, is far removed from the issues and problems that affect city dwellers on a day to day basis.

Interestingly enough after this conversation, I stumbled upon a new movement that addresses the exact issues the city man and I were discussing. The Occupy the Hood protest movement has started to pop up in various urban communities like Cleveland, Boston, Pittsburgh, and the like.

Occupy the Hood is a growing protest movement that seeks to address issues affecting minorities. Members of this movement seek to bring those same issues to members of the Occupy Wall Street movement, not to compete with them, but to forge a more unified front.

Jason Latson, an individual from Roxbury, Massachussetts, said, "I didn't know anything about Occupy Boston before tonight. I heard a lot of chanting in the neighborhood and decided to come out to see what was going on. I think this was a wake-up call for everybody to stand up for equality and peace and justice for all people from all walks of life. Our common enemy is injustice".

The question becomes: Should Trentonians, like other urban dwellers across the country, start an Occupy the Hood protest movement here in the state capitol? Should we stand up and speak out to have our issues heard? The answer to those questions remains unanswered. Tell me what you think...

For more information on the Occupy the Hood Movement, visit their Facebook page here.
Posted by Anwar at 10:00 AM