TRENTON-- Local political activist says he no longer wants to be a part of the mayor's team.

In an exclusive interview, Brooks, a Trenton native, chimed in on a variety of topics. Despite being one of the chief spokespersons at a City Hall rally last June in support of the mayor, Brooks is now calling Mack an outright liar' saying that he had questioned Mack's loyalty even before he won a seat in the mayor's office in 2010.

During the course of the 50 minute discussion, the outspoken activist cited broken promises and misrepresentation on the part of Mack and his underlings. According to the hometown activist, during a phone conversation with the mayor, Brooks asked him about the recent layoff of one third of the city's police force, and the mayor said, 'f*** the police'.

Brooks went on to express frustration and disappointment with what he calls the mayor's arrogant management style. He believes the mayor has a 'napolean complex', where the motto is, 'its either my way or the highway'. 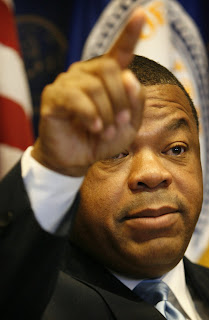 The Trenton activist left no stone unturned. He called out elected officials, religious leaders, and also what he calls 'Facebook activists' that talk a lot on the popular social media website, but ultimately do nothing outside submitting posts online.

Brooks issued a scathing critique of these leaders and said change is needed.

During the interview, the political firebrand did not hold back.

With regard to Jojo Giorgianni, he said that the owner of JoJo's Steakhouse, has on numerous occasions, openly called many African American city officials 'spooks' and other racial slurs. He went on to say that Giorgianni sells 'crack pipes' at his North Trenton store.

When asked why he has decided to come forward now after being a vocal supporter of the mayor, Brooks said that he had become so sick and tired of being lied to and that he wanted to 'wake people up'.

For more information on Brooks or his blog, Today's News NJ, click here.

Please see a video of Anwar's Reflections exclusive interview with Daryl Brooks below: