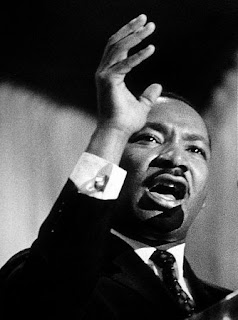 As the city of Trenton grapples with crime, political problems, and failing schools, is it any wonder that Dr. Martin Luther King, Jr.'s message is still relevant to this day.

As Dr. King sat in that Birmingham jail cell in 1963, one of America's giants, reflected on some of the most explosive issues that surprisingly enough, still affect our communities to this very day.

In his Letter from the Birmingham Jail, King lamented the apathy, do-nothingness, and complacency, he saw running rampant during his time.

Sadly enough, it seems as though some of those issues are still running amok in our society currently.

As I sit back and reflect on the condition of New Jersey's state capital, I wonder what Dr. King would have to say about today's state of affairs.

Deep in mind, if I understand this towering figure correctly, I have no doubt that Dr. King would call to task those individuals (including myself) that have in his own words taken the tranquilizing drug of gradualism or succumbed to the all-too-comfortable plague of do-nothingism when it comes to today's pressing issues.

Yet, I also believe that Dr. King would not rest on this scathing critique of modern-day life. It is my belief that a man of Dr. King's stature would take it one step further. I believe Dr. King would go on to implore us to be the leaders we are looking for. I believe he would challenge and encourage us, recognizing that we, too, in his own words, 'shall overcome some day'.

In a speech, Dr. King powerfully said, "We shall overcome, deep in my heart, I do believe" quoting a folk song that eventually became a hymn.

Recognizing the trials and tribulations one may undergo as they embark on a quest for truth and justice, Dr. King said, "Before the victory is won, some will be misunderstood, and called bad names and dismissed as rabble-rousers and agitators, but we shall overcome".

Dr. King understood that any change initiative that required real transformation was going to be met with tremendous obstacles and fierce opposition, yet this towering figure continued to fight the good fight and was not deterred. In his struggle for civil rights, Dr. King was stabbed, spit on, and threatened, but he persevered to the end.

Indeed, we can all learn from his witness and testimony.

The civil rights champion went on to say that at some point, we will be able to "rise from the fatigue of despair to the buoyancy of hope".

Dr. King insisted that WE, and not anyone else, will be the participants in making the world a better place. Therefore, the question becomes: where do WE go from here? Chaos or Community? The choice is ours. I choose Community because I strive to 'be the change I want to see in the world' as Mahatma Ghandi once said.

Email ThisBlogThis!Share to TwitterShare to FacebookShare to Pinterest
Labels: Letter from the Birmingham Jail, Martin Luther King, Trenton, We Shall Overcome