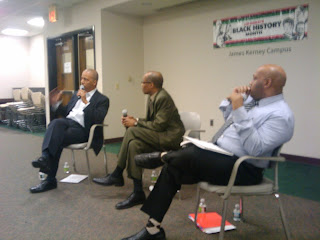 TRENTON--Last night Anwar's Reflections attended Mercer County Community College's (MCCC) Black History event, an interactive conversation between two intellectuals, Professor of African American History, Eric Watson and MCCC Vice President of Academics, Dr. Guy Generals. The dialogue was moderated by Professor of Communications Alvyn Haywood. The purpose of the discussion was to explain and explore the major differences and similarities in thought between scholar W.E.B. Dubois and educator Booker T. Washington.  The event was held in Kerney Hall located at MCCC's James Kerney Campus in Downtown Trenton. The audience consisted primarily of students, but faculty members and others from the local community were also in attendance. As a matter of fact, one audience member, Diane Joseph, a MCCC student that is currently taking African American History, is quoted saying that she attended the event because her professor was one of the speakers and wanted to hear his perspectives on the matter at hand. She said, this type of event is important because it "brings us all together to learn about an important part of Black history". 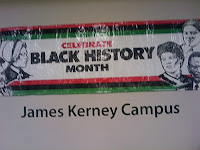 Another MCCC student, Musso Richardson said, "I think events like this are good for the younger generation because there's a lot they don't know about our Black history, having these kinds of debates will give them a chance to learn a little bit more than they learned in high school. You know a lot of students are taught that Blacks were only slaves, but these sorts of events show them that there are great things Black people did besides being slaves".

Another audience member, Judith Smith Parrot, a teacher of adult education at MCCC, said that she brought her students with her to expose them "to a part of African American history, especially the opposing views of W.E.B Du Bois and Booker T. Washington. I think these events are very important not simply for African Americans but for everybody".

Manager of the bursar's office at MCCC, Lutia Brown Joseph, said that this type of event is important "because its about time we educate the youth because they have lost their knowledge of their ancestors. Right now we have Pan-Africa in this society. A lot of our students fail to realize that there's a little bit of Africa in all of us irregardless of what your ancestry is. Talking about these great men and women that have gone before us and have paved the way for our type of education, I think it is important to bring this type of forum to the general public, everyone was invited, students and the general public".

Dr. Guy Generals, VP of Academics, said I think events like this "expose students to ideas and hopefully provocative thoughts that might encourage them to pursue their studies in a more serious manner. I think seeing folks like myself and Eric and Professor Haywood in a casual setting talking about serious ideas is important to instill in them the concept that education is pervasive. It doesn't end or begin in a classroom, you can be social about it, you can be friendly about it, it's something you have to be prepared to talk about it, but its something that can be done in the classroom as much as it can be done outside of the classroom".

Professor of African American History Eric Watson was quoted saying that the event "cultivates a intellectual climate on our own campus, we want our students to be engaged both inside and outside the classroom. This sort of event provides a relaxed environment where students can challenge one another and challenge the faculty members. We like to reinforce the notion that learning doesn't just take place just between the two and half hours that they have African American history. I also think that its important for students to be exposed to our vice president of our college and gives them an opportunity to see that he is an African American male who is interested in issues that impact them. I think that's very rare in colleges today where an administrator engages with a faculty member like this in a public setting, I think its a good thing".

Professor Watson went on to say that he and the College intend to have more events like this. He said, "as our community begins to expands here at Mercer County Community College, we want to do something thematic around different months for different groups. I would like for us to focus more attention on gay/lesbian issues on campus , Latinos, Asians. We really want to make it an inclusive environment for all of our students".

Anwar's Reflections will be sure to keep you up to date on any upcoming events at MCCC.
Posted by Anwar at 2:40 PM