Striving For A Better Tomorrow: The Trenton N.E.W.S

If you're one of those people out there that believe that the news has nothing to say but negativity, the Trenton N.E.W.S. has got a surprise for you. The management team at the Trenton N.E.W.S. (President Antonio Lane, CEO Thomas Heads, and VP of Marketing Cherise South) takes great pride in offering the community positive stories with a unique, one of a kind perspective. Their motto is to 'strive for a better tomorrow'. The Trenton N.E.W.S. is an advertising magazine that is distributed monthly at various locations (for a list of locations please visit http://trentonnewsonline.net/paperlocations). The paper comes out the 15th of every month and is free to the public. From talking to their staff and perusing their magazine, it is clear to see that servicing the community sits at the center of their vision. I invite you all to pick up a copy and be richly rewarded by its uplifting content and eye-catching graphics design. The management staff at The Trenton News were kind enough to sit down with me to discuss what their business is all about. Below you will find a copy of Anwar's Reflections exclusive interview with the Trenton N.E.W.S: 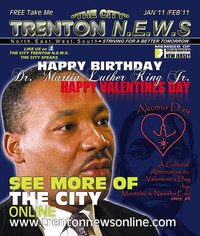 AGS: Please tell our audience a little more about the Trenton N.E.W.S?

We are an advertising newspaper. We used to say local, but we decided to branch out. We are an advertising newspaper for minority businesses and large corporations as well. We highlight positive news in the city. We cover big news. We're trying to reach the scholars in the high schools along with other people that made it out of Trenton, individuals like that. We're trying to put Trenton back on the map in a positive way.

AGS: What is your background?

CEO Thomas Heads: I'm a digital designer, in the past I have worked with Comcast Cable.To make a long story short, initially, I was working with Cream Magazine. I would like to say rest in peace to Darren Morris, the late owner of Cream Magazine. He [Darren] had a vision to inspire local businesses through his newspaper. Initially, I didn't know who he was until he took my picture one day at a party my wife and I were at. Sad to say the Cream Magazine folded after Darren passed away. Since they folded, I saw and felt there was a void in the city that needed to be filled. I never got a chance to work with him, but his wife, Fatima, invited me to help out with the graphic design for Cream. After working with Fatima, I decided to launch my own newspaper.

AGS: What motivated you to start your own business?

Initially I was scared to move the vision forward because I saw what Cream Magazine went through when they were trying to get their paper got off the ground. Antonio [President of Trenton NEWS] motivated me to get this off the ground. Antonio saw that the people in the area still had a desire for a paper because Cream Magazine was no longer around. So we decided to create Trenton N.E.W.S together.

AGS: How did you come up with the name Trenton N.E.W.S?

We had a few other names; we chose this one because it was so catchy. Another partner of mine, he's a photographer. we were at a recording studio where a rap artist by the name of Cyph Bay mention the acronym NEWS North East West South. He didn't copyright the name and didn't mind if we used it, so we were able to use it. Pretty much the name comes from a rap artist named Cyph Bay. So we thank him for the inspiration.

What makes the Trenton N.E.W.S unique?

I think it’s our graphics and the positive nature of our magazine. With the Trenton N.E.W.S, you won't hear someone got stabbed or murdered. As Antonio said, the graphics are unique, we are getting a lot of positive recognition from our clients that our graphics stand out and catch people's eye. We take pride in offering a quality product to the public.

AGS: Did you face any challenges in launching your business? If so, how did you overcome those challenges?

One of the biggest challenges was being away from home, away from our families. Some days we would sit there until 5 in the morning. The late night sessions were a challenge as well. When we first started out we had five overnight (late night) sessions, now we're down to two. We hopefully want to cut those late night sessions down to once a month. Initially, I thought running a paper would be scary. So overcoming that fear was a big challenge as well, but we overcame it and are doing well now.

AGS:  How do you advertise or promote your business?

AGS: What advice would you give an up and coming entrepreneur that wants to be successful as well?

VP of Marketing, Cherise South: If you're launching a business with your friends, I think it’s important to get things in writing.

CEO Thomas Heads: Secondly, you heart has to be in it. If your heart is not in it, you’re going to call it quits at the first sight of trouble. I think you also have to network and advertise to be successful as an entrepreneur.

AGS: Thank you very much for your time.

AGS is an acronym for the author and founder of Anwar's Reflections, Anwar G. Salandy
Posted by Anwar at 12:15 AM