Audience Feedback For The Play, 1960-BLACK

LAWRENCEVILLE- Last night Anwar's Reflections attended 1960: BLACK, a play held at Rider University in the Yvonne Theater. Overall, the show was a success. Many people in attendance said they enjoyed the play and thought the play was very much needed. As a matter of fact, one audience member, small business owner Leon Alexander, said the play "reminded him of the times that [he] went through in the 70's  because [he] grew up in Alabama". He went on to say, the play is "very important because young people need to see what went on back in the day, just to take a map and let the youth know what we went through, to see the struggle we went through to get where we are today". 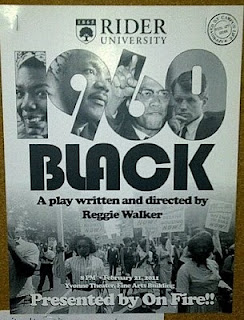 Another audience member, blogger and Rider University alumnus Camille Alexander of Paproxi.Com, said this is her second time attending the play.  She said the play is "awesome" and that this play is so important because it "showed us a missing link in the past. It showed us history from the perspective of the student and I think that is very much needed today".

Another Rider University graduate, Thai Jones, said she came out to the play for the second time around to support her friend and mentor, playwright Rashad Walker. Jones said the play is important because "the art of the griot is being lost and there aren't that many great playwrights that are focusing on this sort of history".

One audience member, Eugene of Trenton, said he "loved the concept of the whole 1960's Civil Rights Movement. He [Rashad Walker] touches on all the facts of the aspiring civil rights leaders of the past. He [Rashad Walker] also touches on the effects the movement had on other Blacks during the movement.  I'm just feeling how he touches every aspect and every point that took place during that time".

At the end of the show, playwright Rashad Walker, said he plans on "taking the show on the road and having more showings of 1960: BLACK". Anwar's Reflections will be sure to keep you up to date on any future shows.
Posted by Anwar at 6:29 AM