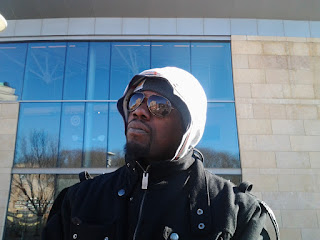 During the interview, Libz, an East Trenton native, discussed his latest project, From Underdog to Overlord, along with other issues surrounding his life and career in hip hop.

The hometown emcee started his career by selling CD's out of his car. Nowadays, the independent rap artist promotes his music online through Facebook, YouTube, MySpace and other websites.

Libz is not your 'typical' gangsta rap or party rap type of emcee. He is known for his reality based lyrics that people can relate to. Most of his rhymes are true stories. In his own words, he wants to use his music to "bring peace" especially in communities like Trenton. The new album is scheduled to be released in late January.


In 2006, he created A Starvin' Artist Productions (A.S.A.P) Entertainment, a record label designed for independent artists on the come up.


During the course of working on this article, Anwar's Reflections came across a number of Libz's friends and colleagues that were willing to share their thoughts on his music and career.

Feko, a recording artist and producer, said that the East Trenton native's latest project is a classic. He went on to say that this LP is Libz best work yet.

One of Libz close friends and promoters, who goes by the name, IMFEELINDAT, said that the independent emcee "makes you think and reflect, not just dance. Most rappers don't give you the kind of substance that Libz does".

Recording artist Dirty Game worked with Libz on his upcoming album and said that the East Trenton native speaks for the youth. He went on to say that his music is like poetry. He doesn't beat around the bush, his music is all about each one, teach one.

Artist and producer Black Collar Biz said that with all the negativity in hip hop, Libz positive message is needed today.

Recording artist, Heaven, worked with Libz on a previous project called No Hook. She said that his music is extremely powerful and uplifting. She went on to say that Libz breaks barriers with his music because both kids and parents can listen to his album together.

BCS Records Marketing Exec, Jonathan Davis, also known as DoeEasy worked with Libz on the track No Hook with Heaven. He said Libz is really passionate about his craft. He went on to say that nowadays everybody raps about sex, but not everyone gives the audience a positive message with true meaning, the way Libz does.

Please see Anwar's Reflections exclusive interview with recording artist Libz below along with his new track Blessings Come Down: