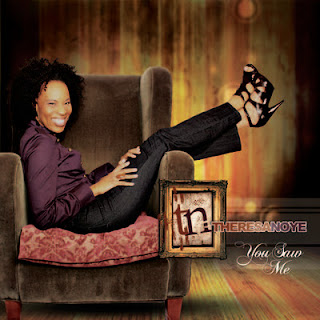 Today, Anwar's Reflections-- a Trentonian affiliate-- sat down with up and coming gospel singer, Theresa Noye. She has a new album out called You Saw Me.

Noye was born in Brooklyn, but now lives in St. Davis, Pennsylvania with her husband and two children, Regal and Nia.

During the interview, Noye speaks about a host of issues, including but not limited to, her album, her family, and the struggles she has encountered during her life journey.

From speaking to the vocalist, I recognize she has quite an eclectic taste for music. Noye said she enjoys everything from Jay-Z to Leah Smith, from jazz to gospel music.

The Brooklyn native never envisioned creating an album, but says she was inspired to put together her debut album, You Saw Me, after finding out that her son, Regal, had been diagnosed with autism when he was only three years old.

Autism is a growing phenomenon in our society. Children with autism usually have a difficult time communicating with others and looking at people in their eyes. According to the National Institute of Child Health and Human Development, autism affects one in 1,000 children in the US.

During the interview, Noye said that all of the songs on her debut album are really a window into her "personal worship time", those times she talked to God about the situation with her son's diagnosis, those times she spoke about her pain, and about her family's struggles. Noye says the music was her own way to navigate through the pain that she was wrestling with during her life journey. In the vocalists' own words, she said "the songs were birthed out of my pain".

She and her husband have created Regal's Walk, a fundraising and awareness initiative for the support of Regal's home therapy program and for educating families in the inner city. A portion of the proceeds that come from the sale of You Saw Me will benefit Regal's Walk.

After releasing the album, the up and coming vocalist has received some positive feedback from those that took a listen.

Robin McCollum of WNAP 1110AM Radio said that, "Her music is the reflection of her sincere and pure heart towards God and you can definitely hear that through her honest and straight from the heart sound".

James Robinson, President of Light Records and co-founder of Gospelflava.Com, said that, "You Saw Me is like an intimate conversation with a loved one who then transports you into the presence of God". Robinson later went on to say that You Saw Me "will be a great addition to your worship library".

One of Theresa fans, an individual whose YouTube screen name is Postprodept, said that Noye's title track You Saw Me, feeds her and reminds her that "God has not forgotten his children".

Another individual, whose YouTube screen name is Deeluv215, said Noye's You Saw Me was "simply amazing".

To get a copy of her debut album, You Saw Me, click here. To access her website, www.theresanoye.com, click here. To reach Theresa, you can email her at info@theresanoye.com. For all other general inquiries regarding Theresa Noye and her ministries, please contact her Manager, Gregory Greene at greene@cool-beans.us and be sure to reference Anwar's Reflections.

For access to Anwar's Reflections exclusive interview with Theresa Noye and a video of Theresa's title track, You Saw Me, please see below: