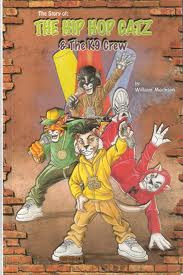 BORDENTOWN-- Area author and businessman William Mackson pens hip hop book to curtail childhood illiteracy but receives no support from city hall and board of education.

Mackson, a resident of Hamilton Township released the book, The Hip Hop Catz, The K9 Crew, a year ago as a way to "get our babies to read, especially in the urban community by using characters that they can relate to".

From DJ Cat Scratch to Tiger Mic, Mackson spins a tale of four cats that like to rap, rhyme, and have fun.

The Hip-Hop Catz teaches children how to observe situations and solve problems as they explore the world of these urban felines. Along the way, kids learn the alphabet, basic words and phrases, as well as math skills, music, and physical coordination.


Despite having a clear vision of what he wants to do with the book, Mackson says it has been a struggle to get the picture book into the hands of more children. Mackson contends that he has given copies of the book to city officials, members of the Trenton Board of Education, and others to no avail.

According to the city's department of citizen's concerns, city government does not handle childhood literacy. The school board was contacted but there was no response as of this article. I was told to contact the public library to get assistance.

Kathy Spalding, Trenton Public Library head, said that they have a copy of the book at the library and that it has a "good message for kids" but that at this time cannot speak on why the book has not received sponsorship and investors.

Early education training specialist, Ingrid Campbell, said that, "Literacy starts at home. The love of literacy must start in the household. Immerse children in literacy early on. Literacy is multifaceted. It involves being both receptive and expressive. All of those aspects are important. It takes a family to be literate. No one can be dependent on the government, it starts with the community".

From a community standpoint, that is precisely what Mackson is seeking to do by creating his picture book.


Vivian Vasquez, author and Professor of Education at American University says that, "in order to best support the literacy learning of children today, we need to understand what literacies they currently learn and use and what participating with such literacies affords them".

She contends that everyday pop culture should not be shunned, set aside, or kept at a distance". In an interview, Vasquez said, " I do believe that there is something to be learned from taking a close look at the everyday language and literacy practice of young people, which includes hip hop".


Another academic, Ernest Morrell, a professor at UCLA, made the argument that hip hop can help young people develop traditional and critical research skills, gain mastery in the research article and conference presentation as genres. Morrell went on to say that the information students gather can be used to advocate for social and educational justice.

Parent and well-known disk jockey, DJ Iron Mike, said that "I think that hip-hop always speaks to the youth...unfortunately, today's brand of hip-hop doesn't offer much subject matter diversity compared to that of the times of the 80's & 90's and even some in the early 2000's. Answering the second part, I think a book of that nature is a fine idea... if you can find a way to relate to a child and show them that learning can be fun and enjoyable, they'll typically be more receptive.

Mackson has received positive feedback for his book. An individual whose YouTube screen name is LilMikeOnTheVibe said that the Hip Hop Catz is a "great idea".

Please see a brief interview below with Mackson: