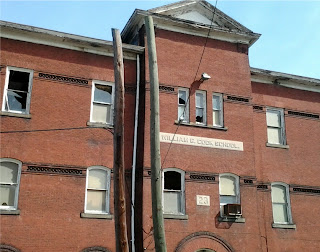 TRENTON-- Longtime community activist, Dion Clark, of East Trenton speaks out about the blight at the old Cook School located at the corner of Walnut and Cuyler Avenues Monday morning. The 101 year old building, William E. Cook School, has been vacant and abandoned since the 1990's.

From looking at the facility, the building has boarded up windows with shattered glass, littered debris, and uncut grass.

Clark, an activist that is passionate about safety and quality of life issues in the city, said that the building is an eyesore and needs to be tore down and used for another purpose. He has visions of turning the former school into a community center where computer classes are taught and new mothers can take their children to daycare.

City resident, Ms. Jenkins, lives on the same street as the old Cook School, and said that the building is an eyesore and something should be done with it because it has asbestos in it. She went on to say that she isn't surprised why businesspeople don't want to invest in Trenton because "look at what you see when you walk or drive down the street, you see abandoned buildings, eyesores". Jenkins went on to suggest that the school be cleaned up or turned into a parking lot to make more room for residents to park when the city plows the streets.

In an op-ed piece written by the Trentonian's own LA Parker, the well-known columnist, is quoted as saying, "the old elementary school house at the end of Walnut Avenue needs a facelift".

According to the director of energy education, planning, and research at Isles, a non-profit organization that seeks to foster self-reliant families in healthy, sustainable communities, there are 1,719 abandoned buildings in the city of Trenton.

City government officials are aware of abandoned buildings like the shuttered Cook School. Just this past summer, the city demolished two abandoned industrial buildings with the hopes of creating a greenway along the Assunpink Creek located between Monmouth Street and St. Joes Avenue.

Trenton Mayor Tony Mack said that the razing of those abandoned buildings is the beginning of a totally different direction for the city. He was quoted as saying that he wants to rid the community of eyesores and turn them into beautiful open spaces.

What happens to the old Cook is still undetermined. Clark and others say they will continue to voice their concerns to city council and members of the Mack administration until something is done to the building.

Please see videos below of the facility and a brief interview with Dion Clark: