MCCC Gets A Touch Up 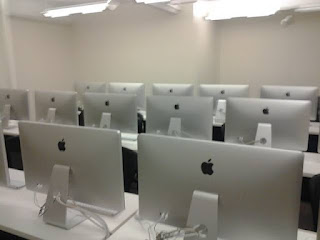 As a former student and MCCC alumni, I felt the need to stop by and check out the changes the College has made.

From reviewing the campus, the College has added a new one-stop registration and advisement center known as The Commons. On top of this, a new career center, science labs, and study areas were added to the current building. Across the street from the College lies Trenton Hall, a facility with new classrooms, a study lounge, an art studio, and a Fashion Design Laboratory.

During my tour, I was guided by two of the College's nursing majors that said they liked the new changes. According to the College's website, students can now complete their associate's degree in Liberal Arts entirely at the Downtown Trenton Kerney campus.

The College was originally an Evening Drawing School, but then turned into MCCC in 1966. The school then expanded its reach by constructing the West Windsor campus six years later in 1972. With these changes and enhancements, the College sought to build upon this history by better meeting the needs of the community.

MCCC President Patricia Donuhue said, "With expansion and improvements downtown, we will be able to  serve more city and county residents, including state workers that are interested in evening or lunchtime classes".

Kerney Campus Provost Monica Weaver went on to say that the College is "bringing programs that have a direct link to the economic success of our region".

During the College's celebration ceremony, both current students and alumni spoke about the impact that the College has had on their education.

As a former student, I can definitely say that I think the changes were well needed. For years, the downtown campus lacked a feel and look of modernization. So on an aesthetic level, I think the changes are both stylish and attractive. From a community need standpoint, I think the addition of Trenton Hall will definitely help train and educate tomorrow's leaders in skills that are actually needed in the workplace.  Trenton Hall is designed specifically for Fashion Design and Art majors, but other students can use the facility as well.

Its highly important that we train and educate people so that they are equipped to handle 21st century jobs. I think MCCC's changes are a good move in that direction.