Independents Square Off In Trenton Once Again 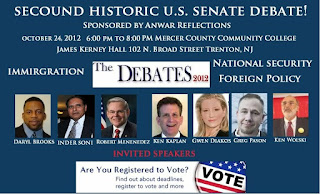 Anwar's Reflections-- a Trentonian affiliate-- hosted and moderated its second U.S. Senate Debate at Mercer County Community downtown at its James Kerney Campus. The debate was designed to increase voter turnout and raise awareness about the upcoming General Election.

All senate candidates were invited, but mainstream candidates Democrat U.S. Senator Robert Menendez and Republican Joseph Kyrillos did not attend.

During the debate, all three independent candidates that did attend, Greg Pason of the Socialist Party, Daryl Brooks of the Reform Nation Party, and Steve Welzer of the Green Party in place of Ken Wolski, said that military spending should be reduced and that our country should instead be invested in a jobs bill or some form of education reform.

Later, during the debate, the candidates went on to discuss illegal immigration. Greg Pason of the Socialist Party said that he supports the DREAM Act, a narrowly tailored bill to give undocumented students a chance to earn legal status if they came here as children, are long-term U.S. residents, have good moral character, and complete two years of college or military service in good standing. Daryl Brooks of the Reform Nation Party had an opposing view. He said that "illegal is illegal" and that he did not support the DREAM Act. Steve Welzer of the Green Party said that he supported stricter enforcement of the immigration laws already on the books.

Indeed, from my observation, the event was a lively and engaging. However, the turnout was not as expected. Many were invited, but few showed. With rising prices, unemployment, and lack of healthcare afflicting the lives of many, it is a wonder why more people didn't come out to hear what the candidates have to say. Do the people really want change? Questions remain...Yet, in any event, the struggle continues.

For more information on the upcoming election, visit VoteSmart by clicking here.

To see video coverage of the debate, see below: