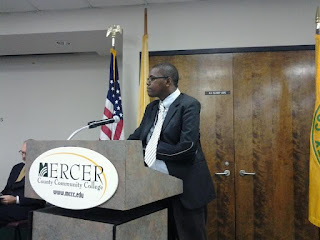 TRENTON-- Independent third party U.S. Senate candidates came together Wednesday afternoon to discuss some of the issues in Trenton, but the two major political candidates were nowhere to be found.

Wednesday night, Anwar's Reflections-- a Trentonian affiliate-- hosted a U.S. Senate Debate at Mercer County Community College downtown at their James Kerney campus to inform the public about the upcoming general election November 6th and to discuss jobs, the economy, and the budget deficit, among other things.

The debate was co-moderated by Delonte Harrod, a graduate student and photographer, and Anwar Salandy, a local blogger.

All candidates were invited, including Democratic Senator Robert Menendez and Republican candidate Joseph Kyrillos, but neither Menendez nor Kyrillos were in attendance.

The debate's participants made note of Menendez and Kyrillos absence. Libertarian candidate Kenneth Kaplan said, "I want to criticize Kyrillos and Menendez for not being here today, its shows what they think about the people of New Jersey by not taking on the opposition, by not exchanging ideas with us". Reform Nation candidate Daryl Mikell Brooks went on to say that, "They didn't show up and I'm disappointed".

Menendez and Kyrillos met in Trenton just two weeks ago for the 101.5 FM debate, but their absence last night was conspicuous. Indeed, what does their absence signify? The question becomes: Are they really concerned about issues and problems affecting the people in inner cities like Trenton? If they are, then why didn't they show up? Sure, independent candidates lack the financial resources and backing that Republicans and Democrats have, but don't they deserve a voice at the table?

In a phone interview, U.S. Senate candidate Inder Soni told me that he wants to challenge Menendez and Kyrillos to a debate in Trenton.

A follow-up debate is scheduled for next Wednesday at Mercer County Community College located downtown Trenton inside Kerney Hall from 6 to 8 pm. All candidates are invited.

Video streaming by Ustream
Posted by Anwar at 9:59 PM