Trentonians Show Their Heritage This Weekend 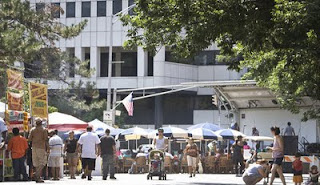 TRENTON-- Tourists and Trentonians alike head to the city's annual Heritage Day Festival for music, food, and fellowship this past weekend. The funnel cake was smelling good, the fish was freshly fried, and the music soothed the soul. Children were playing and couples were dancing Sunday afternoon as there were live bands, inflatable playgrounds, and African drums.

The event was sponsored and coordinated by the city's Office of Cultural Affairs. The festival was held in the city's Mill Hill Park Sunday afternoon. A cultural highlight for the state's capital city, the Heritage Day Festival started this weekend and ended today. However, Heritage Day did not start off this way. It originally began 33 years ago as a pot luck run by local civic organizations. The city's mayor Tony Mack said Heritage Day is a time of fun and a time to showcase your heritage.
Anwar's Reflections-- a Trentonian affiliate-- was on hand to receive festival goer feedback.
James Royale, a local musician, said this Heritage Day was better than other years because there was a greater variety of entertainment available. However, Baye Kemet, head of Trenton's Marcus Garvey School, said the event was seriously lacking the energy Heritage Days have had in the past. Tyrone Riley, a city man, said that despite the event being smaller than previous Heritage Day Festivals, it was just as enjoyable as years past. Ballsey, a city man and musician, said that he enjoyed this year's event because it wasn't cramped up as previous years. Monique, a Bordentown resident, said she just so happened to stumble upon the event as she was driving by and said that she enjoyed the festival because she liked seeing all the kids and families together in a positive atmosphere.
Please see videos below: