Trentonians March To The Beat of A Different DRUMM 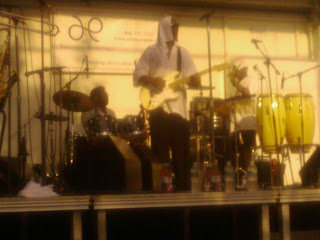 TRENTON-- Hometown musicians perform at during 's Fifth Annual Musicians Reunion this Saturday. Families, friends, and music lovers were on hand to take in this free event sponsored by the Developmental Roundtable for the Upward Mobility of Musicians other wise known as DRUMM. In a city plagued with crime and violence, members of DRUMM have visions of having youth play musical instruments instead of wielding guns. Funds raised by the reunion will go toward the opening a music school and raising music awareness.
During the reunion, event goers had their choice of funnel cake, hot dogs, fish, and much more from local vendors. The Trenton Jazz Ensemble, Kim Miller of Instant Funk, along with Trenton native Clifford Adams of Kool And The Gang fame were just a few of the many that performed Saturday. Renditions of feel good songs like Celebrate Good Times by Kool And The Gang and Let's Get It On by Motown's Marvin Gaye were there for people to listen and dance to.


Anwar's Reflections-- a Trentonian affiliate--  was on hand to take in the atmosphere and talk to event goers. One performer, The Truth, said that the reunion is important because it brings entertainment back to the city. Gregory Dixon, a city man, said that it was great to see all the people he grew up with performing on stage. Ms. Washington, a vendor at the reunion said the event was beautiful, she received a lot of business. Brenda Evans-Jackson, committee member for the Trenton African American Pride Festival, said that she enjoyed the show because the music was refreshing to hear. Another vendor, Allen Harrison, said that despite the low turnout, he would come out to the event just for the music. Many event attendees reported that the low turnout was due to the heat.
Please see videos below: