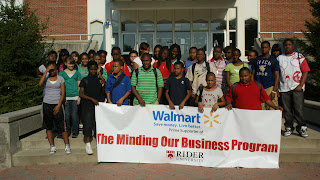 LAWRENCE-- Rider University's enrichment program Minding Our Business (MOB) held its second parent/student orientation for the summer this past Sunday. Families came in droves to learn more about the 14 day spring and summer program designed to train Mercer County youth to be tomorrow's business leaders.
Anwar's Reflections-- a Trentonian affiliate-- was on hand to get input from the parents in the audience. One parent, Toby Sanders, said that he wanted his son, Aaron, in the MOB program because he found that summer programs like MOB are both fun and enriching.
Another parent, Angela Lea, said her daughter Arleana, participated in the MOB program last year and was back to learn and have fun. Last year, Tatiyana won second place in the business plan competition. Her business idea was to sell cosmetics.
William Tabron said his son Will is coming back for his second year in the summer program because he loves it. As a past participant in the MOB program, Will created a business where barbecue sauce is sold.
Another parent, Antoinese Bethea said her youngest daughter, Kyara, is participating in the summer program this year. Bethea's older daughter also took part in the program five years ago. She is currently a junior in high school that has plans to go to college.
Students from Trenton Charter, Hedgepeth Williams, Dunn, and other schools were selected to be in the program. MOB's first session ended two weeks ago. During that session, Patience, a Liberian girl, ended up walking away with first prize in the program's business plan competition. She won $150. Her business plan revolved around fashion and clothing.
The program's director, Dr. Sigfredo Hernandez, said MOB is important because it helps inner city youth close the achievement gap in education. The achievement gap in education refers to a disparity in reading and math levels between inner city kids and suburbanites. During the orientation, math teacher and Rider student Mike Wallenburg made it a point to mention how challenging the program is due to the great amount of homework each student would have to do. However, he also said that with a little effort and commitment each student can succeed in the program.
For more information on how to get involved, please contact Dr. Sigfrido Hernandez at (609) 895-5509.
Please see videos below:
Posted by Anwar at 1:31 PM