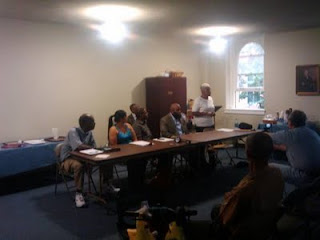 TRENTON— In light of recent events surrounding racial epithets being uttered at a signature gathering event in the West Ward, the Committee to Recall Mayor Tony F. Mack decided to convene Wednesday evening at the Turning Point Church in Trenton.


The committee decided to meet in direct response to a recent video recorded incident involving Kevin Moriarty, a volunteer for the Committee to Recall Tony F. Mack that was verbally threatened by Mack supporters while attempting to gather signatures Fourth of July weekend at a West Ward convenience store.  Racial slurs were also lodged at Moriarty. He has subsequently filed a harassment claim against the three individuals involved and requested an apology from the mayor by email.
In light of Saturday’s event, recall supporter Aida Winbush stated that the committee is not afraid and that they will not be stopped by what happened at the petition drive. She said, “The drive was successful and we will continue to proceed with all the recall duties. Intimidation will not be tolerated”.
Community activist Darren Freedom Green said what happened this past Saturday was an “atrocity”. He went on to take the mayor to task for not publicly repudiating the racial comments made by Mack supporters. Throughout the meeting, the point was made to dispel any notion once and for all that this recall effort is based on race, and not the mayor's poor track record and inability to lead.
Recall committee member, Joann Caroline Dent Clark, said the mayor’s “missteps and bad decisions have the potential to cost the city hundreds of thousands of dollars in lawsuits, fines, and other charges, so when people say the recall is too expensive, not recalling is more expensive”.
She went on to say that, “it’s not racial, it’s not personal, it’s business”.
Committee members have voiced concerns that Mayor Mack's leadership decisions have caused property taxes to rise and worsened Trenton’s already negative image. The committee was asked how many signatures they currently have. Craig Shofed, a committee spokesperson, said they don't have exact numbers as of yet because they are still validating the signatures, making sure they are registered voters.

Recall opponents suggest that Mayor Mack was duly elected into office and should be given a full term (4 years) to turn the city around. They insist that the recall effort is a purely personal matter led by disgruntled residents that have been slighted in some way by this administration.
Please see videos below: