Rider U Students Show They Are ON FIRE 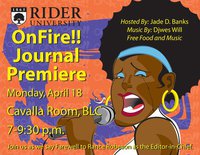 LAWRENCEVILLE-- Ever wonder what a poet, an essayist, a DJ, and a photographer are doing in one location, well the On Fire staff at Rider University have got the answer for you. Tonight, Anwar's Reflections attended Rider University's On Fire Journal Premier. The purpose of the event was to give Rider students and alumni an opportunity to perform their work and express themselves in a comfortable atmosphere.

The journal was created just three years ago. The mastermind behind the journal's creation is Rider senior, Rance Robeson. His vision to create On Fire emerged out of a genuine desire to bring the Rider community together at a time when the school was facing acts of hate. At that particular time, a student on campus was victimized by an act of hate where someone spray-painted a racial epithet on the wall of her dorm.

Three years later, Robeson's idea grew tremendously, and now we find On Fire flourishing. This is the journal's seventh edition. Up to now, there have been 116 people that have contributed to the journal. From photography to poetry, the On Fire Journal Premier has consistently revealed an eclectic blend of skill and ability. During Monday night's event, one student, Peter DeFranzo, performed a piece called Underage. Another student, Aamir Hayes, recited a poem entitled, Let's Start This Revolution.  Rider alum and playwright, Reggie Walker, performed his piece, Love On Mute.

During the premier, students, members of the community, faculty, and others were invited to the stage to do the electric slide, which has become a customary event over the last couple of years. However, this year there was a slight twist, after everyone tried the electric slide, members of the audience came on stage to do the "dougie", a new dance inspired by the hip hop group Cali Swag District. Before the event began, snacks and refreshments were served. Well-known DJ Wes Will was on the one's and two's providing musical entertainment.

The event was hosted by Jade Banks, a New York based author and poet. The event was held in the University's Cavalla Room. The evening had a somewhat somber tone at different points because On Fire's editor and chief, Rance Robeson, was participating in his final journal as a student. He is scheduled to graduate May 13th, he is the commencement speaker for the 2011 graduating class.

Anwar's Reflections will be sure to keep you up to date on any future events at Rider University. Check out the video below showing members of the audience doing the electric slide:


Rider U Students Do The Electric Slide by anwarsreflections
Posted by Anwar at 11:53 PM