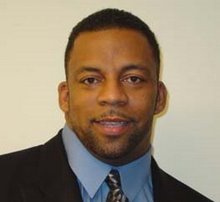 TRENTON- Today, Anwar's Reflections sat down with political activist and founder of the hard-hitting political blog, Today's News NJ, Daryl Brooks, at the Marriott Hotel located in the heart of Downtown Trenton. Brooks and I spoke for an hour and ended up discussing a variety of topics, including the role of city government, state politics, national affairs and much more.

Brooks, a Tea Party member, strongly believes in reforming the criminal justice system, rooting out corruption in political life, and improving conditions in communities like Trenton. His blog, Today's News NJ, can be found exclusively at http://todaysnewsnj.blogspot.com/. Below you will find clips of Anwar's Reflections interview with outspoken political activist Daryl Brooks:

Daryl Brooks by anwarsreflections
Brooks goes on to discuss the Christie administration's fiscal policy and US involvement in Libya:


Daryl Brooks by anwarsreflections
Posted by Anwar at 10:26 PM