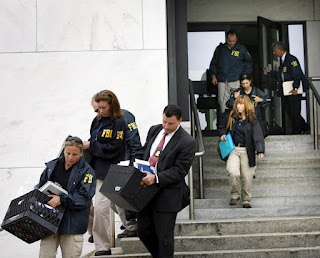 TRENTON-- In the wake of last week's FBI raids, the city of Trenton burst onto the national scene. News reports, tweets, and blogs galore, indeed Trenton was the talk of the town last week.

FBI agents descended onto New Jersey's state capitol in the middle of the night last Wednesday, they stopped off at the mayor's Berkely Square home in Trenton.

The city's mayor, Tony F. Mack, has been the subject of scandal and criticism since taking office just two years ago. Since being inaugurated, he and his administration have been slapped with accusations of cronyism and reckless spending. However, at this juncture, despite these accusations, the FBI has not charged the mayor with any crime or offense. Reports indicate that an investigation is ongoing.

After stopping off at the Mayor's humble abode, the FBI also searched the homes of Mack's brother Raphael Mack along with one of the mayor's campaign contributors JoJo Giorgianni, a convicted sex offender.

Over the last two years, the mayor was a target of a failed recall effort. The citizens group that led the recall effort was concerned about "unstable leadership and the laying off of 105 police officers "according to Trentonian columnist LA Parker. Along with the recall, a lawsuit was filed against the mayor by a former parks employee. The employee said that the mayor asked her to give his friends jobs and she refused.

It is unknown whether the FBI investigation has anything to do with these previous issues and if they are connected to the mayor and his administration.

To his credit, Mack has done some things to improve the city of Trenton since taking office. From renovating the Ike Williams Recreation Center to securing grant funds for public safety that is expected to help bring back 12 officers that were laid off due to budget constraints, the mayor has done things enhance the community. For more info, click here.

Anwar's Reflections-- a Trentonian affiliate-- wanted to get reaction from Trenton residents.

One resident said its tragic that we have a mayor that is being investigated by the FBI. He went on to say that despite being innocent until proven guilty, if the FBI is involved, they must have something on him.

Shawn, a city man, said that his initial reaction after hearing that the mayor's house was raided was that it was 'embarassing'.

Lastly, Richard Cook, a longtime Trenton resident and cousin of former Mayor Doug Palmer, said that he doesn't know what to think but that he never saw a mayor's house get raided by the FBI in his lifetime.