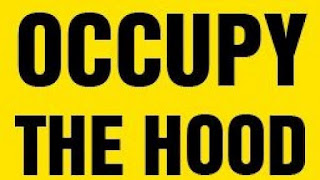 TRENTON-- Last week, members of the Occupy the Hood Movement in association with Anwar's Reflections came together to host a Political Film Fest for the community. The event was held at the Trenton Public Library located near downtown.

Occupy the Hood NJ, an offshoot to the larger Occupy Wall Street movement spreading across the country, over the last couple of months has sought to raise awareness and ultimately cause change regarding issues affecting people living in urban settings like New Jersey's state capital. The group targets issues like unemployment, the prison industrial complex, and dwindling resources for social programs.

During the event, three films were shown, Sing Your Song, The Black Power Mixtape, and Inside Job.

All three of the films had some sort of political undertone in them. One film, The Black Power Mixtape, chronicled the Black Power Movement in the black community and Diaspora from 1967 to 1975. Another film, Inside Job, took a look at the role Wall Street played in the 2008 economic crisis that shook the US.

The films were shown as a way to raise awareness about pressing issues affecting the larger community.

Unfortunately, the turnout was not as expected. Throughout the day, the event had around 20 attendees. Looking at this stark reality raises questions like why didn't more people come out? Was it matter of poor promotion and marketing? Was it a matter of bad timing? Or perhaps there was or is a lack of interest in the community regarding these sort of issues? I, for one, don't know the answer to these questions, but I do know that in any event, the movement will continue.

Stay tuned for future events from Anwar's Reflections that are sure to inform, entertain, and encourage the masses.

A special thank you goes out to the Trenton Public Library for allowing us to hold this event and other events in the past in their Community Room. Another special thank you goes to the African American Chamber of Commerce and local grocery store Wegman's for providing food and refreshments for the event.
Posted by Anwar at 2:12 PM