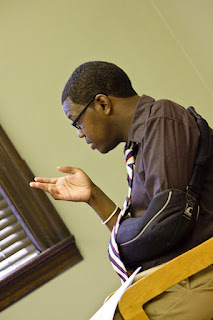 TRENTON-- What happens when an historian, a political economist, an Iraq veteran, a student, and a community activist come together to discuss some of today's pressing issues? That is the question.

Anwar's Reflections-- a Trentonian affiliate-- and Occupy the Hood NJ came together Saturday morning to discuss the 2012 Presidential Election at the Trenton Public Library.

During our nearly four hour discussion, a variety of issues and topics were explored. From immigration and jobs to gay marriage and race, all of these issues were brought to the table Saturday.

Indeed, it was a heated yet enlightening exchange of ideas. The event was sparked by members of the Occupy the Hood NJ movement and blogger Anwar Salandy.

According to the local blogger, now it is more important than ever to raise awareness about this upcoming election, the stakes are high, this election can drastically alter the course and direction of this country. Therefore, we can sit on the sidelines. We need to get involved and vote.

At one point during the discussion, Rance Robeson, an Iraq military veteran, said that President Obama is doing an outstanding job despite his 47% approval rating according to Real Clear Politics. He went on to point out Obama's achievements and say the economy was not the only issue or factor that was going to be critical in one's voting decisions.

Economist and CEO of online marketing company, Intersearch Media, Dr. Celestine Chukumba had a contrary view. He focused on economic issues like jobs. He said that this election will essentially boil down to jobs, jobs, jobs. Chukumba went to highlight what some have called President's Obama's weaknesses, he spoke about Obama's unwillingness to work with the other side of the aisle (i.e. members of the Republican Party). Chukumba said that "at the end of the day, you have to work with both sides". He went on to mention that there has been an attack on the rich coming from members of the Obama camp and that this strategy is no way to work with both sides as a chief executive.

Others on the panel said that President Obama was at a disadvantage coming into office since he lacked executive experience being that he was a senator and community organizer before being elected to the highest office in the land.

Later, Chukumba went on to acknowledge that there is historical significance to Mr. Obama's presidency, but he went on to caution the audience that there should be principled criticism of his presidency if the nation ever hopes to have another president of color in office in the future. Others on the panel echoed this sentiment.


Community activist Daryl Brooks said that "its not only important to look at the world economy" but also to understand how social issues like Mitt Romney's Mormonism may have an impact on this year's election.

Trenton resident Edward Smith said that despite President Obama throwing a bone to young voters by reducing interest rates on student loans this past week, this doesn't change the fact that young people cannot find jobs after finishing college.

Educator Dr. Jack Washington quoted political analyst James Carville by saying that this year's election hinges on the economy by saying its "the economy stupid". Indeed, it seems as though the economy will figure prominent as the nation wrestles with an 8.2% unemployment rate, stagnant wages, and high gas prices.

To get more information on this year's candidates and the election overall, click here.

For more on what the panelists said, please see videos below: