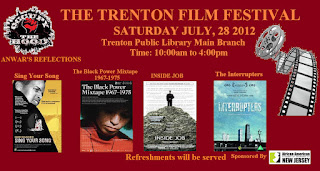 TRENTON- Local group hosts Trenton Film Festival at the Trenton Public Library. Occupy the Hood NJ in association with Anwar’s Reflections is holding a film fest for the community to come together, have fun, and discuss important political issues affecting individuals living in urban communities like Trenton.

During the event, films The Interrupters, Sing Your Song, The Black Power Mixtape, and Inside Job,  will be shown.

According to the film's website, The Interrupters tells "a moving and surprising story of "three violence interrupters" in Chicago" who seek to protect their communities from the violence they once employed. Sing Your Song tells the story of actor and activist Harry Belafonte and his struggles during the Civil Rights Movement. For more on the film, click here. The Black Power Mixtape chronicles and examines "the Black Power Movement in the black community and Diaspora from 1967 to 1975". For more information on this film click here. Inside Job highlights the role of Wall Street in the 2008 economic crisis that shook the US. For more on this film, click here.

Event participants are invited to take part in a light discussion after the films.

Refreshments will be served during the film festival.

The event is free and being sponsored by the African American Chamber of Commerce. The event is scheduled to go from 10 am to 4 pm Saturday July 28th at the Trenton Public Library located at 120 Academy Street, Downtown Trenton.

For more information, contact members of Occupy the Hood NJ at occupythehoodnj@gmail.com.
Posted by Anwar at 9:39 AM