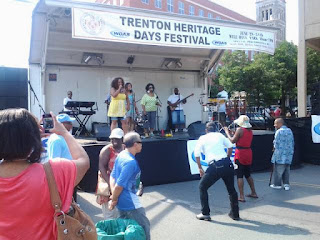 TRENTON- City residents and others head downtown for this year's Heritage Day Festival this past Saturday afternoon.

Anwar's Reflections-- a Trentonian affiliate-- attended this years Heritage Day Festival, a cultural event that started more than 30 years ago in the city's Mill Hill District as a pot luck gathering, but then grew into a weekend long event.

The event was suspended for a year in 2010 due to receiving fewer and fewer private donations. However, it returned to Mill Hill Park last year. For coverage of last year's event, click here.

During this year's festivities, vocalist Grace Little and well-known member of the musical group Patti LaBelle and the Bluebells, Sarah Dash, hit the stage and offered the crowd some of their vocals while members of the audience danced and bobbed their heads.


During the event, there were vendors selling shish-kabobs, fried chicken, and the often requested funnel cake to name just a few of the items. Along with food, vendors also sold jewelry, clothing, and t-shirts with biblical scripture graphic design emblazoned on them.

Trenton native and author of 11 books, Wahida Clark, was also one of the vendors selling and promoting her book.

And for the family, there were clowns and bouncers for children to play with.


From talking with some of the festival's attendees, the consensus was that everyone had a good time and that it was a good opportunity to fellowship and get together as a community. However, of the people I spoke to, some individuals also mentioned that the event could have been marketed better to attract a larger crowd.

Based on my personal impression, I would say the same thing, the turnout seemed smaller this year compared to last year. Two of the individuals I spoke to said that they had no idea that a festival was scheduled and that they just 'stumbled upon' the event as they were going somewhere else, but decided to walk over and see what was happening. City officials did promote the event on the city's website.

During the festival, my close friend and camera person, Monique Corbin, and I captured the event with video.