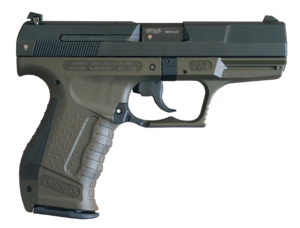 TRENTON-- Imagine if you will, its 9:30 pm on a Tuesday evening, and you've had a rough day at work. You find your self strolling through an abandoned playground in North Trenton (not the safest place to be, I admit) after having a few drinks.

Now then imagine if you will, you stumble across a nameless young man approaching you in a slovenly and somewhat tipsy manner. In one hand, he has a bottle of Hennessy that is half empty and in another he is brandishing a pistol.

As the young man walks by, he asks you, "what you doin' around here? where you from? how old are you?" You take a long look at the young man who appears to be five years your junior.What do you do?

Well, ladies and gentlemen, I can tell you what I did and how I felt because I was on the receiving end of those questions Tuesday night. Between you and me, as this young man asked me questions and held the gun, on the inside, I was scared and on edge, but on the outside, I appeared calm and relaxed because I didn't know where this was going to lead. So, I patiently listened to the young man express his concerns about his life being in danger while he loaded the small handgun in front of me.

The young man seemed quite paranoid, saying random things like, "my boy just got robbed the other day' or 'I was stabbed at a party the other day'. Of course, to me, the young man's statement seemed out of place (since I didn't know him from a can of paint). During our conversation, he said that he could rob me if he wanted to.

At that point, I really didn't know what to think. I didn't want to agitate the young man any further than he already was, so I continued to listen. However, on the inside, I was saying I need to get the hell out of here pronto, I was scared.

But then the conversation began to change, the anonymous young man said, 'I don't want to disrespect you'. He then offered me a sip of his Hennessy and again not wanting to agitate or disturb any further than he already was, I took it. After he gave me the sip, he left. About 30 seconds after he left, I ran out of there, going in the opposite direction.

Indeed, this experience was an eye opener. The most obvious lesson I got out of this was that I don't need to be walking in places that are known to be high crime areas. That young man could have easily robbed or shot me if he wanted to, but he didn't. I didn't quite understand this, but indeed, I wasn't in the position to ask a lot of questions. At the end of the day, I am extremely grateful that this nameless young man didn't do anything to me. Yet this experience also opened my eyes to the highly possible reality that this young man was and is not alone in fearing for his life and that there maybe many others out there like him that are on edge and ready to shoot as well.

However, what I do know is that something has got to give...and soon.
Posted by Anwar at 10:32 AM