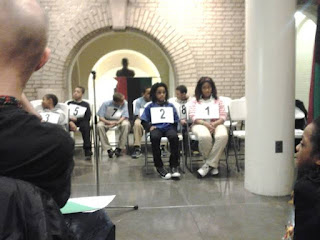 TRENTON-- Empowerment, that's E-M-P-O-W-E-R-M-E-N-T, development, that's D-E-V-E-L-O-P-M-E-N-T. Those were just a couple of the words that local youngsters had to spell Thursday night at  Trenton's First Annual 'Black Pride' Spelling Competition at City Hall. The event was sponsored and hosted by the Capital City Youth Development Council, a local community group whose mission is to 'Motivate And Prepare Future Leaders'.

According to a press release, the event was designed to "promote and continuously enhance the warm spirit of peace and love that was shown at last year's African Pride Festival".

During the spelling competition, children from throughout the city and surrounding areas showcased their scholastic talent, promoting Black Pride in their quest to become champion spellers. The competition was open to all 4-7th grade students in public, private, charter, and independent schools.

New Black Panther spokesperson, Divine Allah, hosted the event and said that "the spelling bee was designed to offer substance to symbols". He went on to say that "each child has to be a leader, a thinker, and a doer".

This annual event is being held to highlight the anniversary of the assassination of Malcolm X, one of the leading figures of 'Black History' in America who embodied educational discipline and scholarship. As a child, young Malcolm Little, - [long before X] was told by an elementary school teacher that he could not become a lawyer. Although discouraged from formal education, and after facing many odds, Malcolm grew to become a worldwide icon and Black America's premier example of courage, manhood, respect and scholarly discipline.

This event is one of many held during Black History Month, where we are striving to showcase positive achievements and educational talents of Trenton children and youth.

Winners of this competition will move on to the 2nd phase/competition in May [Where Health And Wellness Is The Theme] - and then 'hopefully' onto the main stage at this year’s African Pride Festival, where they will be presented with 'Grand Prizes'.

Please see the video below: