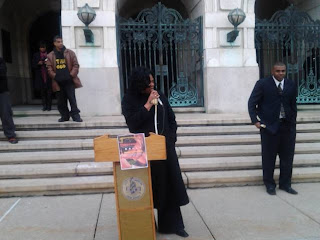 During the Restoration of Our City community rally, members of the Fathers and Men United For A Better Trenton and the Men of Hope, and other concerned speakers approached the lectern and expressed their outrage toward the current state of affairs in Trenton, New Jersey.

According to news reports in the Trentonian, there were 24 murders in 2011, and there have already been three murders this year, this comes after a sizable layoff of 108 police officers in September last year. Citizens and activists alike are concerned about this current state of affairs.

One of the speakers, Pastor Paula Cook, said that young men need help because they have been abandoned and neglected by many in our society and as a result these young men are now "killing each other for 26 inch rims and gold chains". During her presentation, she expressed disappointment about too many men not doing their part in raising today's youth. Cook went on to call out and challenge church leaders saying that "gang members recruit more than the church". She said that community leaders need to get involved even if it means going block to block. Cook said the city needs a change.

Rally coordinator Anthony Shellman, said that churches and other community leaders need to be held accountable. He went on to say that a bill is in currently in the Senate called Tamrah's law that if passed will make it mandatory that offenders caught committing a crime with a firearm will be issued a 10 year sentence automatically without parole.

Tamrah Leonard, a 13 year old Trenton resident, was killed in 2009 at a stop the violence rally in North Trenton, during a senseless drive-by shooting.

Please see video footage of the rally below: