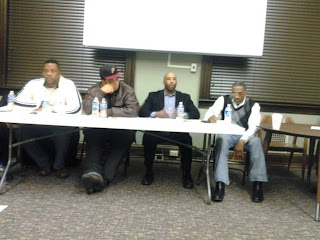 TRENTON-- Marcus Garvey once said that a people without the knowledge of their past history, origin, and culture is like a tree without roots. It was in this tradition that area residents and activists alike met at the Trenton Public Library Wednesday night for Anwar's Reflections First Ever Black History Panel Discussion.

During the nearly two hour discussion, a variety of topics were explored and addressed. Members of the audience were invited to ask questions as well. 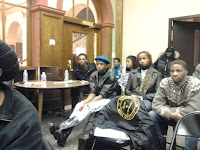 From education to black leadership, to President Obama and social problems afflicting communities in Black America, the panel covered a lot of ground.

Baye Kemit said that leadership does not have to be monolithic, it does not have to be one person, our leaders are our parents and grandparents. Darren Freedom Green said that President Barack Obama needs to 'stand up and just be a man on some issues' as it relates to problems afflicting the black community. In his analysis of President Obama, Daryl Brooks said that the president has bailed out Wall Street but failed to mention the word poverty in any of his State of the Union speeches.

As a blogger or citizen journalist, I thought it was important to carry on the tradition of the words of the Negro National Anthem, Lift Every Voice and Sing, by inviting a variety of different community leaders and activists to come to the table and have a discussion that would illustrate the diversity of Black America on a local level here in Trenton, New Jersey.

As a viewer and reader, I invite you to determine if the discussion reached that goal.


Please see footage of the event below: