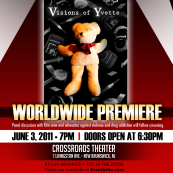 NEW BRUNSWICK--Indeed, life is all about choices and sometimes desperate times call for desperate measures. This seems to be the backdrop to local filmmaker Patrick Pierre's latest movie, Visions of Yvette, which premiered this past Friday at the Crossroads Theater in New Brunswick.

The film chronicles the life of Yvette, a young college student that shows signs of potential, but unfortunately encounters the wrong people and gets caught up in a tangled world of drugs and prostitution after making some tough decisions. In spite all this, Yvette, the film's main character, does have a glimmer of hope in her newborn child, Justin.
The film takes the audience on Yvette's nightmarish journey through addiction, recovery, and possible redemption. Yet the film also tells the larger story of what it means to survive in a dog-eat-dog capitalistic world where only the strongest will survive. Indeed, when our resources become scarce and our money gets funny, its amazing what desperate things we can sometimes do to get ahead. In the case of Yvette, we find her succumbing to the wishes of Ricky, the film's antagonist played by Brian Watson, a slick-talking character that has a knack for preying on the 'weak'. Yvette gives into Ricky's manipulation after being fired from her hotel management position. She then becomes a call girl who gets up in drugs.

After watching Visions, many things stand out. For one thing, the acting was stunning. In particular, I found that Jenna Figueroa's performance as Yvette was powerful. She demonstrated raw emotion, striking intensity, and unbelievable vulnerability. Her performance truly revealed a three dimensional character in the sense that you really got an idea of where she was coming from as a full-fledged human being and not simply a two dimensional caricature. Through her journey, the audience truly saw her ups and downs, her hopes and fears. In her role, I also saw on a larger level a truth that not too many people acknowledge, namely that serious issues can affect middle class households just as much as they can affect lower income households. In this film, we find that Yvette was raised by her mother, Darlene, played by actress Julianne Jones, in a middle class household where there was a strong religious foundation, yet Yvette still took a destructive path in life.

In terms of plot and character development, I think Pierre does a good job as well. Through the picture he paints, the audience was able to see where each character was coming from and what they are about early on. Moreover, the plot was not hard to follow either and kept you wondering what was going to happen next throughout the film. However, I was not sure what Pierre was up to when I noticed a shift in the film's color scheme (it went from vibrant color to drab black and white) a third of the way into the movie, and then another shift in color toward the end. Was this intentional? Did the shift in color represent a larger theme in the film, this was unclear to me. Also, the ending of the film left me wondering what next, due to its open-ended nature.I think the filmmaker could have provided more closure for the audience.
Overall, the film is powerful. Its realism is unmistakable. Visions of Yvette does an excellent job capturing reality and the possibility of hope and redemption without promising or guaranteeing poetic justice.

Fans of Pierre's work came from all around to take a sneak peak at Visions. Cast members and experts in the drug and addiction field took questions from the audience after the film. The world premier was sponsored by two non-profit organizations, the SWS Organization and UIH Family Partners. Anwar's Reflections will be sure to keep you up to date on any future developments.