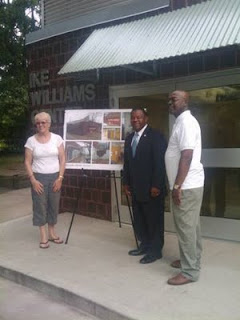 TRENTON— Every now and then, old things become brand new. Today, Anwar's Reflections— a Trentonian affiliate— attended the grand opening of the Ike Williams Community Center in Mill Hill's Clay Street Park located in Trenton. The city's mayor—Tony F. Mack— along with north ward councilwoman Marge Caldwell-Wilson were on hand to do a ribbon cutting and give area residents a tour of the newly renovated facility that had been closed for the past six years. The Community Center’s namesake— Ike Williams— was a famed boxer from Trenton that won the NBA World Championship belt in 1945.

Improvements were made both to the interior and exterior of the building. From new lighting and flooring to the addition of a kitchenette, improvements were seen. New courtyard doors were also installed. The facility was refurbished by the Geo Matrix Construction Corporation.

The facility is designed to give children and citizens alike the opportunity to meet, play, and have fun in a safe environment. The mayor said reopening this center is important because as so many young people will be out of school over the next week or so, they need a safe place to go to. Mayor Mack said, "I believe it’s our responsibility as government as citizens both private and public to offer opportunities for young people to be involved while they are out of school. It is our job to make sure they are busy, that their minds are occupied, and that they have a safe haven to enjoy. So I am excited about it. For many years, almost six years I believe, this place has been vacant and dormant. We wanted to change that".

In light of recent reports indicating that there is a citizen-led committee currently working to recall him from office, Mack said he is going to focus on things he and his administration can control. He said he is going to keep on working and provide the services that our taxpayers elected him to provide. Mack said, "We'll keep opening buildings, we'll keep paving streets, we'll keep our trash collection to two days a week, we'll continue to cut down that $55 million deficit, and we'll let the chips fall where they may".