Knock Out Game Must End 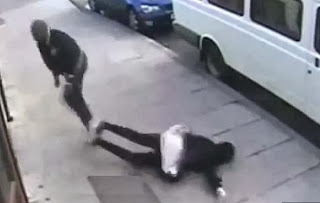 TRENTON-- So, as I was chatting with my brother this past week, I was told about a new phenomenon happening in different cities like New York and Philadelphia. Its called the Knock Out game.

Sadly enough with this game young people (teenagers) have been assaulting innocent bystanders by deliberately catching them off-guard and striking them with their fists. The aim of the game is to 'knock out' the bystander to the point they become unconscious.The assailants then post video footage of the assault online.

Victims of this sick and senseless game have included individuals like Diego Moya, a chef from Manhattan and possibly even an elderly woman in East New York. Along with these individuals Phoebe Connolly, a young lady that was biking in the Columbia Heights area of Washington, was "punched in the face" by a teenager. Connolly goes on to report that the teenager laughed after hitting her in the face. Thankfully, Connolly was not seriously injured.

According to Jeff Rosen and Avni Patel from Today.Com, the assailants involved in these attacks are even targeting women and children. They go on to report that "cases are piling up, and that police are on high alert".

Activists like the Rev. Al Sharpton and Tony Herbert of the National Action Network have both denounced the attacks calling them a form of 'cowardice'. Herbert has called on social media websites to take down videos of the attacks.

I want to join the chorus of individuals that have come forth to denounce these senseless acts of violence. I don't want this cowardice form of behavior to grow and fester. Yet at the same time, one wonders whether this aggressive behavior is symptomatic of the larger violent culture that exists in the United States. According to Mel Schwarz, a Psychology Today contributor, the United States is "easily the most violent high-income society on the Earth". Schwarz goes on to say that "when a system—individual, family, or culture —adapts to and normalizes grossly abhorrent activities, that system is terribly impaired. This condition is known as normosis, whereby we make normal that which is indeed aberrant. As a society, we find ourselves in just this circumstance".

Indeed, we as a society cannot allow things like the Knock Out game to fester and grow. I think the most important thing to do here is to first of all raise awareness on this important issue. If you don't what's going on, you can't take action. So, let's get the word out there, first and foremost. The second thing we need to do is call a spade a spade and publicly denounce this behavior, whether it be by the water cooler at work or at the barber shop or at the beauty salon, or even in the school cafeteria, the culprits behind these cowardly acts must be shamed. They must know that this behavior is not acceptable. And a big first step in that direction is to have social media sites like YouTube take these videos off their site. By doing this, we can send a loud and clear message that cowardly and thuggish behavior cannot stand in a civilized society.