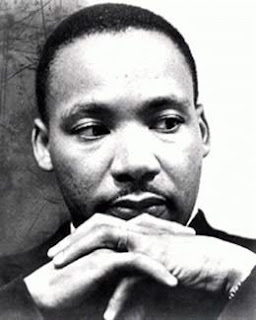 America, America
God shed his grace on thee
And crown thy good with brotherhood
From sea to shining sea…

America, oh America, as I sit back and reflect on my short 30 years in this country, I recognize that I have indeed witnessed tremendous growth and progress but at the same time, I have to also admit that I think we are still a far cry from what Dr. Martin Luther King, Jr. envisioned in 1963 when he gave his historic I Have A Dream speech. Indeed, I can’t help but applaud the passage of the Civil Rights Act, desegregation, and the election of our nation’s first Black President in 2008.

But at the same time, I must admit that these breakthroughs don't in any way erase the fact that we still witness wealth inequality, racial profiling, and other forms of social injustice in our society today.

Alas, one can only imagine what Dr. King would say if he heard research reports indicating that the average net worth of households in the upper 7% of wealth distribution has risen by 28% while the net worth of households in the lower 93% of society have dropped by 4%? I can see him lamenting the fact that the rich are getting richer while the rest of us are, quite frankly, stuck in the basement struggling economically. On top of this, one wonders how Dr. King would react to seeing high-profile cases like Trayvon Martin's that brought the ugly issue of racial bias and profiling back into our collective consciousness.

For those that don't already know, Trayvon Martin was a 17 year old unarmed black male whose life was tragically cut short after an altercation one night while wearing a hooded sweatshirt and carrying a bag of Skittles. Martin was shot by Florida community volunteer watchman George Zimmerman. Zimmerman, a white male of Peruvian descent, claimed self-defense and invoked Florida's Stand Your Ground Law before being acquitted on all criminal charges brought against him. According to a Christian Science Monitor article, many people across the nation disagreed with the verdict and thought that race played a significant factor in Martin's untimely death. Indeed, if Dr. King were alive I can hear him asking, 'when will a man be judged not by the color of their skin, but by the content of their character?',

Along with this case, I have also seen other situations surrounding racial profiling in America. In New York, they have adopted stop and frisk policies aimed directly at Black and Hispanic men, that have ignited a firestorm of controversy and criticism because of the humiliation and harassment they have caused. Moreover, in Arizona, they have instituted an immigration law that many have said fosters racial profiling. Indeed, a study done by Pew Research finds that majorities of blacks still perceive discrimination from many institutions in their communities, and are consistently more likely than whites to say blacks are treated less fairly than whites. Things have gotten so bad to the point that in a New York Times op-ed piece, the newspaper went so far as to call the United States a "country plagued by racism, which persists in ever more insidious forms."

At the same time, one need not stop with these sensational cases that have hit the front pages of our beloved newspapers to see what I am getting at as it relates to America's shortcomings and how far we are from Dr. King's Dream. One can also look at the 500 plus murders in Chicago alone last year, the recent Bankruptcy of Detroit's Motor City, or the dilapidated condition of many of the streets that bear Dr. King's name to see the point I'm making here. Bottom line: there's something wrong in America. Dr. King's Dream of the Beloved Community has not and cannot be realized until these conditions change and one recognizes that change doesn't occur overnight, nor does it come easy, change takes time and effort. Indeed, as Dr. King said himself, "even as we face the difficulties of today and tomorrow". Its important that we not give up on our Dreams...a Dream of a better tomorrow despite the stark realities of today...a Dream where one day this nation will rise up and become that shining city on a hill that it was meant to be. In the words of an old Negro spiritual, deep in my heart, I do believe, we shall overcome one day.

As I put the finishing touches on this letter to America on the 50th anniversary of Dr. King's historic I Have A Dream speech, I recognize that essayist James Baldwin was right when he said, "I love America more than any other country in the world, and exactly for this reason, I insist on the right to criticize her perpetually". Indeed, we as a country have come so far, but yet we have so far to go. Sure, we must celebrate the victories and breakthroughs, but we must never forget the work that is left to be done. In other words, there will be neither rest nor tranquility in this country until justice rolls down like waters and righteousness like a mighty stream. As we fight for our Dreams of a better tomorrow, let us not forget Dr. King, who he was, and what he stood for.
Posted by Anwar at 2:45 PM