Cafe International Goes Out With A Bang-- GPS Style 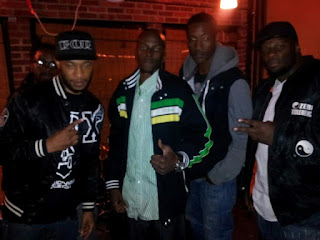 TRENTON-- Add a little James Brown, sprinkle a dash of Sam Cooke, and incorporate some spoken word and Southern cooking and you have Cafe International's last GPS event. Last Friday, the city's well-known local cafe was host to Ghandi's Poetry Spot for the last time since the Cafe has decided to close its doors.

During the event, Anwar's Reflections-- a Trentonian affiliate-- stopped by to check out the festivities. Regular GPS performers like Fat Boy said that Ghandi was 'magnificent' and that GPS kept him off the street. Cafe International's part owner, Chazz said that 'he loved Trenton' and that the GPS would not stop despite this being the Cafe's last show.

In an interview, Brian Williams, said that Ghandi is an energetic dude, he has the gift to gab.

Guitarist Gary Amir DeGree said that he had a ball at the show after performing a rendition of Prince's classic tune When Doves Cry.

GPS regular Joel A. Smith said, "I remember meeting Ghandi a few years back and recognizing that he was going to do something very special and positive in the City of Trenton, and I think it goes without saying that he has done exactly that. Every poet, musician, artist and fan owes he and The Cafe International family a tremendous "Thank You" for their vision and dedication to making it a reality. Salute to Ghandi"

Charmaigne Full Figga Davis said that Ghandi is like a brother to her and that the GPS is an eclectic array of people that all come together. You hear all different types of music and culture from individuals from Trenton.

Please see video footage of the event below along with interviews before the show: