Trenton Cafe Goes Out With A Bang With A Little GPS 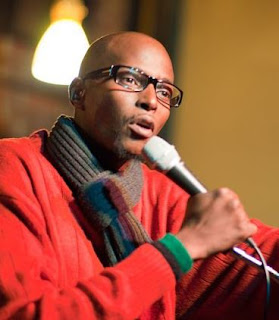 TRENTON-- Local hang out spot closes up shop as many city residents say good bye this Friday. One of the city's most well-known social hang out venues is shutting down shop. For those that don't already know, Trenton's Cafe International will be closing its doors in the near future.

One of the cafe's last shows will be Friday, April 27th. After being in business for 5 years now, the Cafe has been host to many popular events like Ghandi's Poetry Spot (otherwise known as GPS), Jazz nights featuring Kool and the Gang trombonist Clifford Adams, and various comedy shows just to name a few.

This Friday, the Cafe will be hosting its last GPS show featuring its founding master of ceremonies, Uganda Prescott, otherwise known as Ghandi.

Prescott, a Trenton resident, decided to hold his open mic poetry spot at the Cafe three years ago because he saw that there was a poetic void in the city that needed to be filled. In the beginning, it was a struggle for Prescott. Initially, he had trouble finding a venue that would hold his show. As a matter of fact, Prescott was turned down by numerous locations, but the Cafe was willing to give him a chance.

During each show, audience members were invited to share their poetry, music, comedy, or whatever else their heart desires. At GPS, all are welcome to share their gifts and talents.

After starting out small and fighting the perception that a poetry spot would never work in a place like Trenton, Prescott soldiered on and to this day, he has developed both a large and consistent following. Indeed, over the years, he has attracted and brought together quite an eclectic cast of characters to perform.

Southern cooking will be provided by the Cafe. Doors open at 8 pm. Admission is $10 or $17 if you want a meal to go along with the show.

Stay tuned for interviews related to this story: