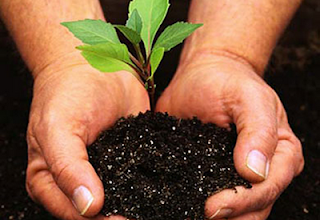 TRENTON- What's life like if you never get a chance to step back and smell the flowers? Well, the folks over at Union Baptist Church in Trenton want to make sure the kids at the Monument School don't have to answer that question. Saturday morning, Anwar's Reflections attended the Spring Into Action program held at the Monument School off Calhoun Street in Trenton. The event was sponsored by Union Baptist Church (UBC). The project was spearheaded by UBC's Young Adult Ministry leader, Reverend Kim Mayner.

The purpose of the Spring Into Action program was to help beautify the school so that students, teachers, and parents alike would have the opportunity to be surrounded by a pleasing atmosphere that is conducive to student learning. Members of the church came out in large numbers Saturday morning to rake leaves, shovel, mulch, and sweep up the grounds of the facility. The event began early Saturday morning and ended up finishing early that afternoon.

However, church members were not alone in their community efforts. They were joined by young men from the community as well. These young men were being mentored by members of UBC's Men Ministry program. The Men's Ministry thought it was a good idea to have these young lads on hand, to not only witness the positive things the church was doing, but also to have them participate in this program because members of the Men's Ministry keenly understand that there is wisdom in the saying, 'many hands make light work' and that hard work builds character, a trait young men will very much need in life. During the event, service workers were provided with breakfast by Wawa and other vendors in the area.

The program's second phase is scheduled for May 21st. The church is currently taking donations to help fund the Spring Into Action program. For information on how to help out or get involved, feel free to contact Reverend Kim Mayner at (609) 392-2245.

Here's a video of the young men working with members of the Men's Ministry at the Monument School on Saturday, Anwar's Reflections will be sure to keep you up to date on any future developments: