LAWRENCEVILLE--Today, Anwar's Reflections attended an event at Rider University where United States Senator Robert Menendez was on campus to deliver a presentation regarding United States politics. The event was sponsored by the Rebovich Institute for New Jersey Politics. Menendez spoke before a crowded audience in the Daly Mercer Room Tuesday evening at 5:30 pm. The title of Menendez's discussion was 'A Report from Washington, DC'. During his presentation, the state senator spoke about the importance of examining "what's happening both domestically and internationally in the United States", not simply from the perspective of any particular political agenda, but rather to look at current circumstances and see whether what we witness today in the United States actually "satisfies our vision of what we want America to be, and what we want it to represent to the world". Menendez went on to say that we as citizens "have to make some difficult choices in the days ahead. Choices surrounding budget cuts and America's role in the world".

During Senator's Menendez's presentation, he posed two distinct questions, "What is our vision of the America we call home? What is it that we want life in America to be like?" He went on to say that, "sometimes in the midst of our daily challenges, we lose sight of the bigger picture".   But he went on to gently warn the audience that we do this at our own peril. During his speech, Menendez said that his vision of America ultimately came from his mother, a political refugee from Cuba, that simply had "faith in her God, a faith in her family, and an abiding faith in a new country". While growing up, Menendez recounts that his mother would always emphasize the importance of doing the right thing. The state senator said he took his mother's advice with him as he took a role in public service and politics. He said that the choices we make in this current economic crisis "will fundamentally define who we are as a people, what we stand for as a nation and what we want America to represent for the foreseeable future". Later, in his speech, he went on to say that his vision of America begins with "civility in our politics and in our lives so that we can look across the table and across the aisle at those that hold deeply to views that one might find disdainful but find a way to seek common ground." He also went on to discuss the importance of investing in innovation and education when it comes to the nation's budget. 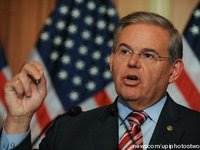 At the end of his presentation, Menendez answered questions from the audience. One student asked the senator to give his take on Medicare, another student asked Menendez to chime in on the issue of collective bargaining and labor unions. Another member of the audience, a professor, asked the senator to consider reducing the size of government to make it more efficient. Chairman of the Rebovich Institute for New Jersey Politics, Benjamin Dworkin, coordinated the event and said the Rebovich Institute will be holding another presentation April 14th in the same location with former New Jersey Governor Brendan Byrne. Anwar's Reflections will be sure to keep you informed on any new developments.
Posted by Anwar at 10:40 PM