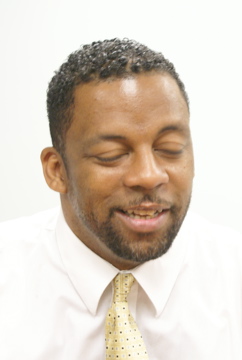 TRENTON-- In a recent interview, local activist tells all about his recent bout with the New Jersey State Parole Board.

Daryl Brooks, a longtime Trenton political freedom fighter and now member of the Tea Party who served a three and half year bid in prison for flashing two minors (a crime he insists he did not commit), decided to sit down for an in-depth interview last week.

During the interview, Brooks spoke out in a way that he hasn't done before. The brash and outspoken political firebrand was in rare form last week as he opened up about his longstanding fight against injustice and persecution.

Since being released from prison, Brooks has sought to bring about social and political change within his community. According to an Occupy the Hood New Jersey blog, Brooks was the first person to run for U.S. Senate from Trenton, New Jersey. Although his campaign proved unsuccessful, he has coordinated numerous community organizing activities to stop violence and bring different people together.

Despite his efforts, Brooks has experienced problems with the State Parole Board and the public at large. In May, the Parole Board required that he attend counseling sessions. In these sessions, Brooks reports that he was required to admit guilt for a crime that he insists he did not commit.

After not complying with their request, he was ordered to take a polygraph exam or lie detector test as a part of the Parole Board’s Containment Approach that monitors the activity of individuals that are on parole for sex offenses. This test was required despite Brooks having had no parole violations since being released from prison according to Philadelphia Tribune reporter Linn Washington. Once he was given the lie detector test, Brooks reports that he was told by the Parole Board that he failed.

Brooks subsequently requested a copy of the results to determine why he failed but was denied. The Parole Board confirmed this. When a parolee fails a lie detector test, they can have stricter restrictions placed upon them. The political activist questions the results and has voiced concern over how the lie detector was administered. He has expressed concerns involving the use and application of testing equipment, the recording of information, and the polygraph examiner’s impartiality.

Research bears out what Brooks is saying. According to Polygraph Specialist Joseph Buckley , the polygraph technique is highly accurate, but at the same time, errors can and do occur.

Most errors happen when the examiner fails to prepare the subject properly for the examination or by misreading the physiological data on the polygraph charts. This makes it all the more important that the examiner be properly trained. According to a State Parole Board representative, parole officers can and do administer polygraph examinations because they have gone through training and are required to undergo recertification every two years.

Brooks and another parolee that spoke on the condition of anonymity both question the accuracy of lie detectors. They wonder why the results of these tests can be used to restrict an individual for Parole Board purposes, but cannot be used in a court of law. Mother Jones journalist Brendan Koerner confirmed this finding when he reported that polygraph test results are generally inadmissible in court.

Through these issues with the lie detector test and by refusing to comply with the Parole Board’s requirement that he admit guilt for a crime he claims he did not commit, Brooks was now in violation of his parole which meant jail-time. In a previous interview, Brooks said the possibility of going back to prison was “terrible”.

Brooks went on to call his experience with the Parole Board an instance of 'persecution' citing that it was unjust to have this happen to him, because he has already served his time and he has had no parole violations since being released.


Along with this travesty of justice, the political gadfly spoke out about countless situations where he was spit on, threatened with violence, and physically attacked by members of the Black community, a community that he has consistently fought for over the years with his protests and rallies. It came to a point where even his daughter was threatened by others in his community. Indeed, the Trenton activist had serious concerns that someone was going to kill him and that he was going to have to maybe kill someone to defend himself or his family.

In the interview, Brooks describes how utterly disappointed he was in the Black Community because of the way he was treated. He could not understand why they hated him when he did so much to improve things in the Black Community. It came to a point where the political activist threw up his hands and said, “my own people are trying to destroy me”.

After this, it came to a point where 'enough became enough' for the political activist.

After years of fighting injustice, facing fierce opposition, and wrestling with the possibility of going back to prison for something he deemed to be unjust, Brooks says that the pressure became overwhelming and he came to a fork in the road where he felt a life or death decision needed to be made.

In the interview, the political malcontent said that the night before he was arrested in May, he sat in his room all night staring at a bottle of prescription pain pills that was lying around his house, contemplating whether or not to take them. His intentions were to take the pain pills as a way to end his misery and cut his life short. That particular night, all sorts of thoughts ran through his head as he glanced as that bottle of pills. However, something stopped him from taking them.

Brooks says that the only thing that prevented him from taking his life that night was listening to Martin Luther King, Jr.'s sermon But, If Not, a 1967 speech that highlights the importance of what King called civil disobedience where one refuses to abide by an order of the government because your conscience deems it unjust.

The political activist said that he had no worries that following morning when he received a 7 o’clock call from parole because he knew that he never “walked alone”, God was with him always. So that following morning, Brooks buried those pain pills saying that he felt strong and inspired, like Martin Luther King, Jr. before he was escorted to that Birmingham Jail in 1963.

Brooks went on to say that despite the persecution he is currently going through, history is ultimately on the side of right and that justice will eventually prevail. However, the political activist is still concerned about the social implications of others going through a similar ordeal with the Parole Board that he went through.

The Trenton born activist expressed concern regarding the Parole Board's use of power. In the interview, he makes the case that the State Parole Board is abusing its power whenever it administers a lie detector test, but does not provide the parolee with a copy of the test results. Brooks fears that the Parole Board may begin to require others that have been convicted for non-sex offender related crimes take these same sorts of tests and not be given a copy of the test results either. The political firebrand thinks this could have damaging social effects as it relates to one’s civil liberties.

Brooks says, "Are they [the Parole Board] testing this out for the next line of individuals? This may start off with people with sex offense and lead to people with regular crimes. This could be the start like when we used drones in other countries, now that was a test, now let's see what its like to use drones here in America. Now let’s do it [lie detectors] with people that shoot people, drug dealers, people that do a regular crime, let’s test it out on a group of people that people are going to despise because they're not really human".

In general, this issue brings up questions about how we treat parolees. Does society care about how people on parole are treated since they have already served their time or does society think that it doesn't matter how these individuals are treated because they committed crimes against society? Are parolees being pushed around by the Parole Board or are their rights being protected under the law?
Posted by Anwar at 10:53 AM