Tycoon Visits Princeton But What About Trenton 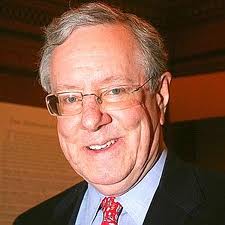 PRINCETON-- As well-known millionaire and media giant Steve Forbes swept through a nearby town (Princeton) not too long ago, it made me think, what, if anything, will tycoons like Steve Forbes do for the city of Trenton, a city riddled with crime, joblessness, and despair?

Now don't get me wrong, I am not suggesting that well-off individuals like Steve Forbes owe inner cities like Trenton anything. I am simply saying that with all the wealth, opportunity, and access individuals like the Forbes Magazine giant has, there might be something they can do to assist communities like New Jersey's state capitol.

Forbes was at Princeton University giving a talk on the tax and monetary sins of the West.

Now I came to this point after considering recent events involving another wealthy person. Not too long ago, Facebook creator Mark Zuckerberg dipped into his treasure chest and gave Newark public schools a handsome amount of money. In light of this, the question for me becomes, why can't individuals like Forbes and others like him open their hearts and quite frankly, their wallets, to help out an ailing city like Trenton.

That question remains unanswered, but I am willing to take a stab at it for the time being.

My response to that last question begins with what I and many others are seeing in the papers everyday. In light of Trenton's recent history, it doesn't seem to be a worthwhile place to invest in. I mean come on, unless you're living in a bubble, you recognize that our beloved state capitol has seen better days. 23 homicides last year, a dismal high school graduation rate, and an unacceptable amount of blight or abandoned properties all show that the Garden State's capitol city is not exactly prime real estate that everyone is dying to get their hands on.

Let's call a spade a spade, Trenton is not headed in the right direction. And unless we (those that live here currently) or others (outsiders like Steve Forbes) take action, we can only expect things to get worse. Bottom line: Investors are unlikely to invest in a losing horse that seems to be going in the wrong direction. They simply don't see an attractive return on investment.

Having said that, the question now becomes, how do we become that place where not only wealthy individuals like Steve Forbes want to invest and help, but also everyday people. For me, I think the first thing we need to do is stop blaming the government for our problems, sure budget shortfalls adversely affect our communities in terms of programs being cuts and public service layoffs, but I'm a firm believer that if there is a will, there is a way to make things better, even if your 'money is funny' or your 'change is strange'.

We don't need the government need to give us funding to ensure our homes are in order. I do believe we (myself included) can take ownership of some of these problems we face. I don't think we need to always solicit or reach out to local or state government to get things done in our community when we already have human resources (everyday people) in place that may be able to fill that gap or void that exists.

All in all, I think by taking action and becoming a participant, we will be in a better position to improve the quality of life in our communities. Along with ending the blame game, I think its also important to stop criticizing the powers that be, for the unfortunate state of our city. Indeed, local officials bear some of the burden and responsibility for the mess we find ourselves in, but I also think there is room for we as everyday citizens (myself included) to take some sort of responsibility for the condition of our communities.

My way of taking responsibility is to post blogs, create community forums, and engage others in a meaningful conversation that will hopefully generate ideas to make things better. However, I recognize that your skill set may take you in an entirely different direction than mine.

Ultimately, my point is that whatever your skill set is, it can be used somewhere in the universe to alleviate a social problem that afflicts all too many members of our community. So I invite one and all to get involved and become a participant in this human drama called life. Instead of being a passive spectator that idly watches as our communities turns to shreds, why not be a participant that contributes to the solution. I leave you with that question and invite feedback from others.