Trenton Kids Are in The Market 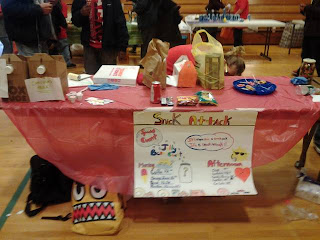 MOB is a community enrichment program designed especially for Trenton area youth. In  the program, inner city youth are taught the basics of running and operating a business.

At this year's marketfair, MOB recognized one of its chief sponsors, Regional Manager Tom McCaloon of retail giant Wal-Mart.

During the event, there was a talent show, music, and youngster's were given the opportunity to sell their goods to members of the community.

One student sold tie die shirts and brownies. His mother, Valerie, said that she is proud of her son and that the MOB program has taught him about being responsible. Another parent, Tawanda Bennett, said that she had both her son and daughter in the program and that they have benefited from being in MOB. This year her son sold hot dogs, bagels, and other snacks.

Marsha Nelson, a former MOB student and now entrepreneur behind the business, Bling and Things, said that after being in the program, she has aspirations of being a part-time entrepreneur, among other things she wants to do when she becomes an adult.

For more of Anwar's Reflections coverage of the MOB program, click here.