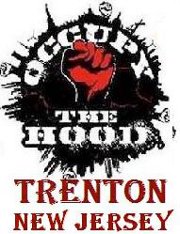 During the forum, meeting participants discussed an array of issues. They spoke about the prison industrial complex, education, crime, voting, and civic engagement.

Occupy the Hood was born out of dissatisfaction with the larger Occupy Wall Street movement. Occupy Wall Street originated in New York's financial district just three months ago, but has branched out into various cities across the United States (including Trenton) and abroad.

Occupiers protest a variety of issues, including, but not limited, to debit card fees, the growing gap between the rich and poor, Wall Street bailouts and corporate influence in politics.

Members of the Occupy the Hood Movement argue that issues affecting the lives of 'minorities' and poor people were not being adequately addressed by the larger Occupy Wall Street protest movement.

Out of this dissatisfaction, the Occupy the Hood Movement was born. Hood occupiers speak to a whole host of issues that affect the day to day lives of people living in urban communities like Trenton, Philadelphia, and Pittsburgh. Issues like crime, education, the prison industrial complex, and budget cuts, to name a few.

Saturday morning, members of the community engaged in a robust discussion.

During the forum, Rodney Jenkins, a city man said, that we need to hold our leaders accountable and not just vote during election years, but rather we need to get more involved in between elections.

Michael Johnson, a Ewing man said, he would like to see more young people get involved in the Occupy the Hood movement. He said, "I want to see more people become a part of the solution and not the problem".

Daryl Brooks, a city activist said, he wants the movement to not only raise awareness but also challenge the banks and challenge the prison industrial complex. He thinks this movement has the potential to become the next Civil Rights Movement.

To get involved, contact Occupy the Hood New Jersey by email: occupythehoodnj@gmail.com or visit their Facebook page by clicking here.