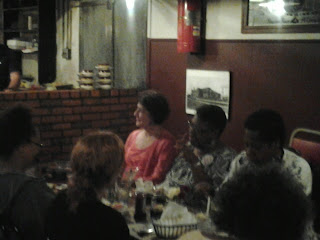 TRENTON-- Area residents head to Checkers Food and Spirits located in the city's downtown district Thursday night as part of their monthly Downtown Social Club. Checkers, a restaurant that has been a staple in the Trenton community for 25 years now, serves burgers and soups as their specialty. They also provide a bar where you can enjoy a cocktail with your meal. The restaurant was awarded the 'Best Burger in Trenton' by readers of the Downtowner.

Anwar's Reflections--a Trentonian affiliate-- was on hand to see what others were talking about and to get a feel for what an evening at Checker's was truly like. From firsthand experience, I have to say the food was tasty and the social atmosphere was inviting. Once you walk in, you are greeted by hostess and the owner, Tom Fowler. After it was all said and done, I ended up ordering a cheeseburger with potato salad. The burger was thick and juicy, flavorful to the tee. The potato salad had some appeal, but needed a slight dose of salt to my liking. Yet all in all, my experience at Checkers was pleasant, I would go again not only for the food but also for the friendly, down to earth atmosphere one experiences while at Checker's.

Other people at the restaurant were also willing to give their feedback. One person, Susan Robinson, said that she had been to Checker's before but only for the cocktails, this was her first time trying the food. She said everything was delicious and the service was on point. Trenton resident Laurice Reynolds, said that she enjoyed herself as well and was hoping that Downtown Trenton shops and merchants may one day re-develop as a place that stays open in the evening. Another person, Ms. Mannella of Trenton said she also had a cheeseburger and was pleased but said the wine was substantial.