Thoughts on Graffiti Artist: WILL KASSO 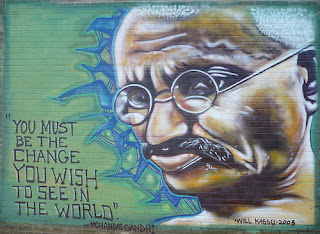 TRENTON--Will Kasso Condry has news for those that think there is nothing going on in Trenton besides crime and gang violence. For those that don't know who Will Kasso, as he is known, allow me to introduce this talented graffiti artist that hails from our state capitol. His work has touched not only this own neighborhood, but has also branched out to people in, for example Philadelphia and Maryland.

It just so happens, that I first came across Kasso’s work by chance, just one year ago. On a typical walk home, I stumbled upon a mural that, quite frankly, took me by surprise because it seemed so out of place. On a very dark and desolate alleyway in Trenton, I came across a vivid image of Mahatma Ghandi. Beside this great man’s depiction, was an equally eye catching quote that still resonates with me to this day, “You must be the change you wish to see in the world”. (For those who want to take a peek at the mural, they can find it off of Montgomery Street, between East Hanover and State streets.)

This mural and its thought-provoking words truly inspired me. At that very moment, I declared to myself that I had to figure out who this artist was and meet him face to face. It turned out he is one of Trenton’s own. Subsequently, I linked up with this gifted artist through Facebook and he then was gracious enough to have a casual sit-down interview with me at the Artworks studio in Trenton.

After conversing with Kasso, I realized that the Ghandi mural was neither his first nor his last masterpiece. He and his crew, SAGE Collective, started doing murals many years ago. The vision behind all of their artwork has always remained the same: to revitalize and rebuild the city. As anyone can readily attest, Kasso and his crews' murals have done exactly that by demonstrating a range and versatility. From Bob Marley and Barack Obama to everyday citizens, Kasso and his team creatively blended vibrant images with poetic wordplay. Nowadays, you can find Kasso and the SAGE Collective working together diligently on a large scale 12 mural project called the City of Angels that will be on display in various parts of the city very soon.

Heaven knows that Kasso's work is desperately needed in a community like Trenton where poverty is real, opportunity seems scarce and despair looms large. But instead of looking at these stark realities afflicting the Trenton community as insurmountable problems or challenges, this graffiti artist had the audacity to see hope and opportunities to rebuild the city. Instead of taking the easy way out by just complaining or cursing the darkness, Kasso and his crew had the courage to light a candle in a place that many people had written off altogether.

After speaking with this inspirational artist, I began to ask myself one fundamental question: How many people, like Kasso and other towering artists before him, actually have what it takes to look at the world they live in a new or altogether different manner? Indeed, we as a community can learn a lot from Kasso’s example. Quite frankly, I believe all too many of waste a lot of energy by complaining and pointing fingers and then become cynical about positive change.
The good news is that since we are part of the problem, we can definitely be part of the solution. How you might ask? Well, first I think we ought to put an end to all that finger pointing and start looking at Trenton in a much different way. If we insist on viewing the city in the same manner we have been accustomed to, we will only continue to see the same issues plague our community and in the end, nothing will change. Instead, we must renew our vision of what Trenton could be as Will Kasso and other artists have already done. We must see the city as a place where at-risk young men and women are embraced and acknowledged by supportive networks such as local churches, mosques, and other concerned civic groups, not gangs.

We must envision Trenton as a place with better schools, safer streets, and more jobs. We must imagine a community where our parks are clean and the citizens take pride where they live. Having a clear vision is an essential first step on any journey because without it, as the bible says, we as a people perish.

However, having a vision alone is not enough, that vision must be reinforced by concrete action on the part of everyday citizens like you and me. The burning question becomes: are you ready to put your hand to the plow and take bold action. And for those that think that taking action is all about grand political gestures, I’ve got news for you, taking action can mean a whole assortment of things on a more everyday level such as volunteering, gathering your neighbors together to do a trash pick up on your block, mentoring a child, and what have you. However, please don’t get me wrong, this journey won’t be easy and results aren’t promised overnight, but if we work together and stay committed, progress is indeed possible. The choice is ours.

A copy of this article can also be found in the July 2nd, 2010 edition of the Trenton Times newspaper:
Posted by Anwar at 11:31 PM